The world is still reeling from the aftermath of the Covid pandemic, as companies have shifted to new ways of working, adopting technologies to suit those working remotely or sometimes in different regions. According to a new study from the Confederation of British Industry (CBI) conducted with 250 companies, 67% of businesses across the United Kingdom have unfilled digital vacancies and less than a third (31%) are confident that the UK business community will be able to access the digital skills they need in the next 3-5 years. This is as a result of tech skills becoming more and more in demand across the UK. Therefore, to meet the expanding demand for digital technology skills, employers have to attract a wider talent pool.

“Neurodiverse (ND) and neurodiversity refer to the infinite variation in cognitive functioning that can lead to differences in thinking, attention, and memory.”

Neurodivergent individuals often have the skills employers need for digital tech roles, such as: 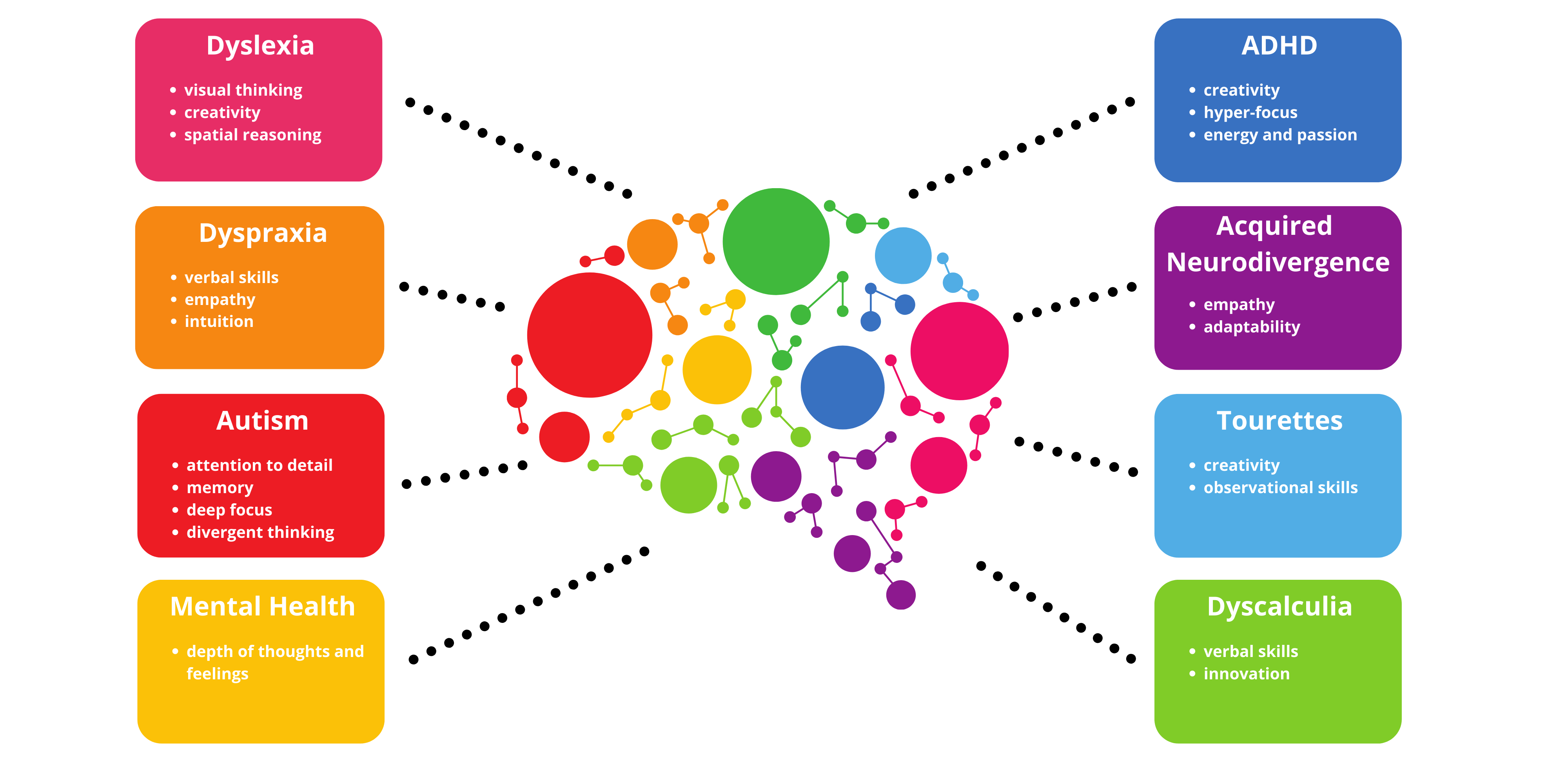 There is a huge untapped pool of neurodivergent talent keen to bring their sought-after skills to data analytics, cyber security, gaming, coding, design and much more in digital tech. The conditions listed below are all part of diagnostic labels used to explain the diverse ways of thinking, learning, processing and behaving. As with all people, we each have our talents and challenges.

The autism spectrum is a range of neurodevelopmental conditions generally characterised by difficulties in social interactions and communication, repetitive behaviors, intense interests, and unusual responses to sensory stimuli.

It is commonly referred to as autism or, in the context of a professional diagnosis, as autism spectrum disorder (ASD), but the latter term remains controversial among neurodiversity advocates, neurodiversity researchers, and many autistic people due to the use of the word disorder and due to questions about its utility outside of diagnostic contexts.

Attention deficit hyperactivity disorder (ADHD) is a condition that affects people’s behaviour. People with ADHD can seem restless, may have trouble concentrating and may act on impulse.

Symptoms of ADHD tend to be noticed at an early age and may become more noticeable when a child’s circumstances change, such as when they start school.

The symptoms of ADHD usually improve with age, but many adults who were diagnosed with the condition at a young age continue to experience problems.

Dyspraxia can affect your co-ordination skills – such as tasks requiring balance, playing sports or learning to drive a car. Dyspraxia can also affect your fine motor skills, such as writing or using small objects.

It’s estimated up to 1 in every 10 people in the UK has some degree of dyslexia.

Dyslexia is lifelong and can present challenges on a daily basis, but support is available to improve reading and writing skills at school and work.

Dyscalculia is the name given to difficulty in learning about, comprehending or using numbers.

Such people will have difficulty in undertaking mathematical calculations such as adding, subtracting, multiplying and dividing, and can often find they also have difficulty understanding money, time, distances, directions and so on.

Illegible handwriting is a common sign of dysgraphia, but not everyone with messy penmanship has the disorder. It’s also possible to have neat handwriting if you have dysgraphia, though it may take you a long time and a lot of effort to write neatly.

Some common characteristics of dysgraphia include:

Irlen Syndrome is a neurologic condition resulting in an over-active or over-stimulated brain. This extra brain activity affects lots of different areas of functioning including:

This condition is often a lifetime barrier to learning and performance.

Hyperlexia is a syndrome, which affects with speech, language and social interaction. It may be accompanied by  “different” behaviours. Children exhibit an intense fascination with letters, numbers, patterns, and logos, and a very precocious ability to read, spell, write and/or compute usually before the age of five. Hyperlexia is observed in children who demonstrate the following cluster of characteristics:

Throughout history, we’ve relied on our ability as a society to think differently in order to survive and thrive. With differences in thinking, neurodivergent people can bring alternative perspectives that may not have been explored before. It’s critical that organisations continue to prioritise cognitive diversity in their workforce, as every individual brings unique knowledge, experiences, and skills to the table and can help drive progress in technological innovation.

Treating each person as an individual is crucial and it’s important not to stereotype. Neurodivergent people have conditions that present differently between individuals. Like any group of people there will also be rich diversity of backgrounds and characteristics, including ethnicity, gender, and sexual orientation.

Diversity metrics in businesses are often focused on diversity in the sense of age, gender, and ethnicity. Diversity of thinking styles and cognitive differences is a newer aspect of diversity in the workplace and it’s been suggested that when companies do look to hire for neurodiversity that it’s more of a case of being fair as opposed to considering the potential performance benefits neurodivergent people can bring to a workplace.

How can the tech sector recognise and recruit neuro-diverse talent? 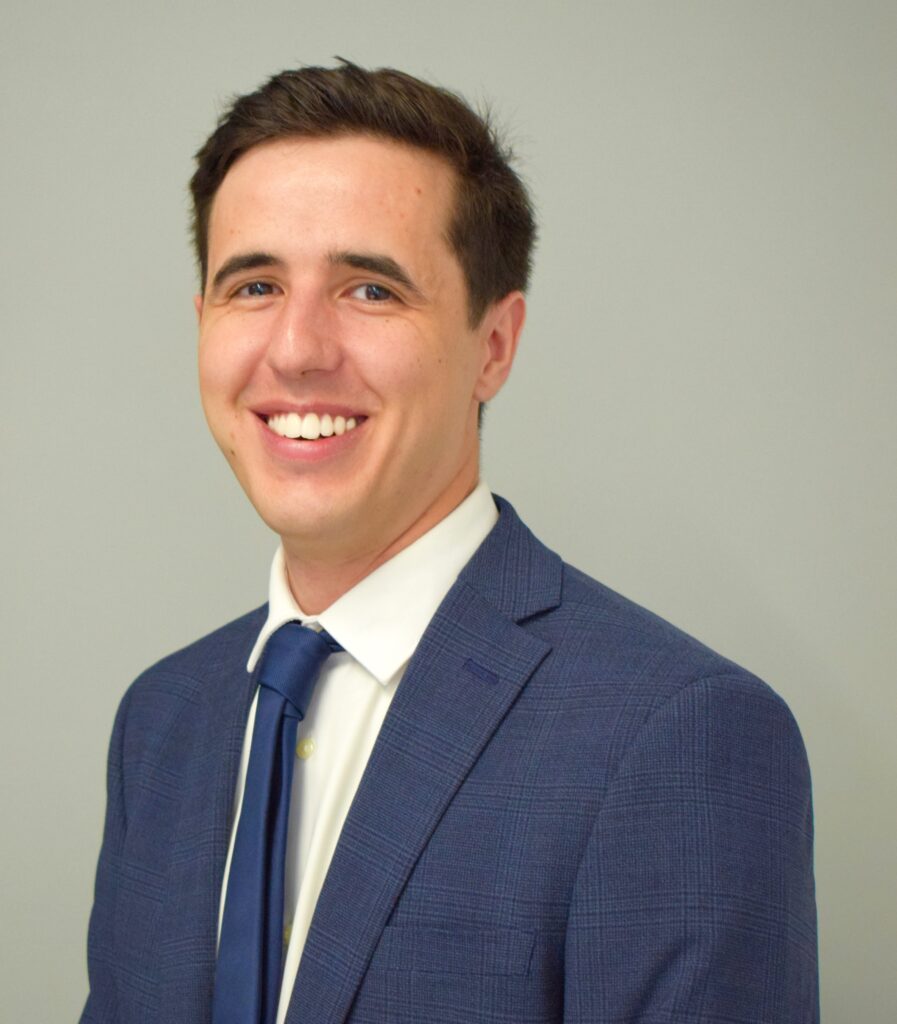 One of the first barriers to entry for someone who is neuro-diverse is the interview process. Traditional interviews take into consideration things like body language and awareness of social cues that can put a neuro-diverse person at a disadvantage.

However, here at Keystream Analytics (KA) we had the opportunity to employ one of our most brilliant talents in the team, who has been diagnosed with dyslexia at an early age, Jose Figueira (Data Engineer).

Jose F. shared that during his childhood “he was a slow reader, and had terrible grammar and spelling skills”. He struggled with connecting sounds to letters and distinguishing the difference between letters and words that have similar sounds (homophones), which caused him to retake his first grade at school.

This led his teachers and parents to seek the appropriate advice. He undertook speech and language therapy which has helped him immensely throughout his life.

“Being dyslexic has made me a more resilient and patient person”.

“We dyslexics portray the world through images e.g., it is easier for me to remember a picture rather than words. Normally dyslexics have excellent creative thinking, empathy and problem-solving skills. Being dyslexic has taught me a valuable lesson which is, complicated challenges are solved with determination and resilience, in other words, just keep trying and don’t give up!”.

Before joining our team, Jose F. revealed about his encounters with other interview processes where he faced difficulties with various tests including verbal & written tests. Therefore, it is important for organisations to accommodate the candidates according to their needs to avoid losing other brilliant skills the candidate may possess for the position.

Here at KA, Jose F. has settled in extremely well and has become an integral part of the team. We try to create a safe and supportive environment. In Jose’s opinion, one of the most helpful tools KA utilises is the Jira Kanban Board by Atlassian, as this helps with written instructions and daily tasks.

So what skills can neuro-diverse individuals bring to the workplace? And more specifically the tech workplace?

A study has shown that autistic people are often more naturally empathetic than neurotypical people. For a tech company this could be beneficial because it could mean understanding a customer base more and being able to deliver more innovative and meaningful products and services. The same study has shown that people who are dyslexic often have stronger analytical thinking skills. The tech industry relies heavily on highly analytical people for areas such as machine learning, data science and information analysis amongst many other tech areas.

It’s important for companies looking to hire more neurodivergent people to consider certain recruitment and workplace adjustments so they can become more inclusive and welcoming of neurodivergent talent.

As an industry, we need to work harder to educate how talent can be leveraged in different ways to fulfil these roles, because employees are often a company’s greatest asset.

Keystream Analytics help organisations who struggle with data/analytics to achieve sustainable BI solutions, in line with your strategy & industry specific.